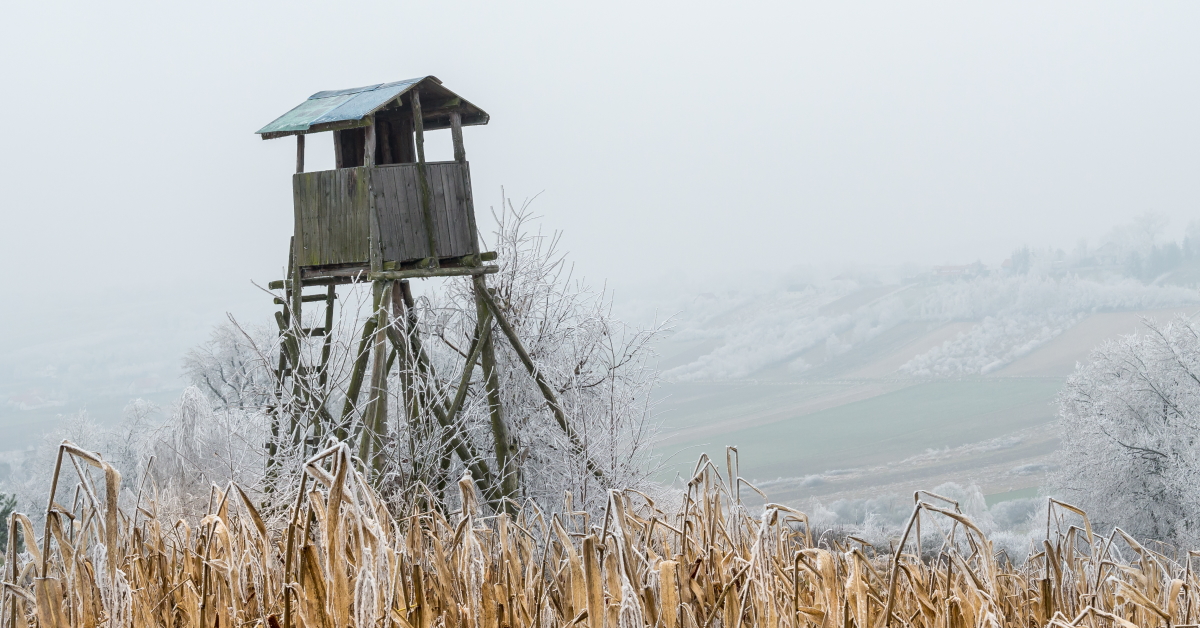 When setting up a deer blind, a lot of hunters go with the tried-and-true method of setting up where there is plenty of food and cover. If there is an area that has acorns, feeders, fruit, or food plots, then it won’t be long before a deer makes its way to that neck of the woods. Common logic dictates this is a pretty safe bet for setting up a hunting blind. However, there are other habits to play to beyond a deer’s need for food and cover. The following will break down the best spots to place a blind for your next deer hunting excursion.

The Mid-Point Between Food and Bedding

If you’ve done your fair share of whitetail deer hunting, then you already know that deer eat in one area and sleep in a completely different area that affords them lots of cover. For those of you hunters out there with access to scouting equipment, you probably have discovered where these two areas are. Set up your hunting blind somewhere between point A and point B.

Deer hunting guides and hunters alike know that higher is better. The more elevation you have, the more visibility you’re going to get of the surrounding area. This is highly advantageous for hunters that are having a hard time spotting game from their perspective on the ground due to trees, bushes, and other foliage. If you can put yourself above all that, you’re going to have a much easier time seeing your trophy.

Whitetail deer are creatures of habit. They generally eat and sleep around the same time, and they also prefer paths that afford them the least amount of resistance. These well-worn trails are a relative gold mine when it comes to deer hunting. Simply identify the spots with the most deer traffic and set up your blind around one of those areas.

A pinch point is an area of the woods where deer traffic is essentially funneled down to a very narrow area due to two or more obstacles. For instance, a deer may be funneled between trees, water, and bushes of a certain area, which gives them little room to navigate. These pinch points serve as opportune places to set up a blind because the deer will be moving slowly enough to get a good shot off.

As previously mentioned, deer are creatures of habit and they generally tend to favor routes that provide the least amount of resistance. This is especially true for the areas known as crossing points, which could be anything from a creek to a fence. Try to think like a deer when you scout this. If you know a deer has to cross the creek, determine which point of it is going to be the easiest to get through. It’ll likely be the shallowest part that affords the most amount of footing. Crossing points are a great spot to set up hunting blinds.

When a deer senses a threat in the area or gets spooked, it’s going to try to run off. However, deer don’t just run off anywhere. They actually tend to have escape routes that they’ve used before in which plenty of cover is provided. Yet again, it helps to think like a deer for the sake of determining where you’re going to set up your blind. Look for areas that have faint trails that lead to dense cover or thickets a deer would want to hide in. Chances are, you’re going to see a fair amount of deer traffic coming through the adjacent land.

As one of the most renowned Kansas deer outfitters in the Midwest, our 350-acre high-fence hunting environment is the perfect destination for deer hunts and guided hunts. In fact, we’re one of the few Kansas deer hunting outfitters that is open year-round, requires no special licenses, and actually guarantees that you’ll get a clear shot at your trophy. You also get the added benefit of having your very own hunting guide who will show you the lay of the land, help carry gear, and assist you in selecting the perfect hunting blind on the property.

Take the first official step by booking your hunt. Remember, Kansas Trophy Outfitters offers both big game and exotic animal hunting for all experience levels of hunters. KTO has everything you need to ensure you have the thrilling experience you’ve been searching for. We also have a hunting lodge where you and your party can stay after your hunt concludes.

Our Favorite Trail Cams for Hunters